Tired of quarreling endlessly with his imperious brother Klaus, Thomas Dinger quit the production of Viva, the second La Düsseldorf album, and promptly set off for the south of France. Frustrated and far away from home, his mind turned to the possibility of a solo album. An album devoted to his own musical ideas, free from domineering voices telling him what to do. Presenting his own vision in the context of a La Düsseldorf LP would have been difficult at the best of times. “I wanted to create something by myself, to make something just for me and nobody else,” the third member of the band Hans Lampe recalls him saying — hence the album title Für mich. He recorded the album in La Düsseldorf’s studio in 1981, with Hans Lampe on board as co-producer and engineer. The six instrumental pieces, melancholic and elegiac in character, featured layers of synthesizer sounds, closer to the music of Wolfgang Riechmann or Michael Rother than that of La Düsseldorf. (The pulsating 4/4 beat associated with Klaus Dinger can be heard just the once. Two tracks are actually written in a 3/4 signature). The nearest points of reference in the La Düsseldorf canon might be the more measured “Rheinita” and “Silver Cloud.” In the studio, Dinger and Lampe allowed themselves plenty of time to experiment. As Thomas wished, his brother Klaus stayed away from the recording and mixing sessions. Hans Lampe described the creative process thus: “There was a large balcony to the rear of Thomas’ apartment, looking onto a vast, overgrown courtyard. A little park, a verdant oasis in the big city. We sat here often, listening to music, working on the LP and musing on life. Thomas and I complemented each other marvelously, bouncing ideas off each other. Our understanding was so great, the mood was so deep and heartfelt, we thoroughly enjoyed working together.” Which is how the album sounds: simultaneously conveying a sense of somber depth and unfettered lightness, even playfulness. 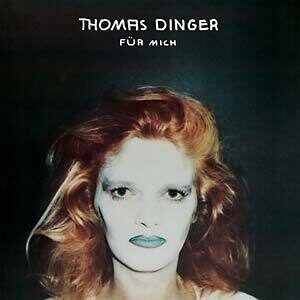