Best known for their participation in the 1983 Eurovision Song Contest, Belgian synth pop band Pas De Deux present their complete collection. These songs were made in 1982 and 1983, including the cult hits ‘Cardiocleptomanie’, ‘Mani Meme’ and various versions of ‘Rendez-Vous’. These songs were never together on one album. Some of them were only released as a single or on some special compilations made in Spain and Germany after their much discussed participation to the Eurovision Song Contest (ESC) in 1983.

The 2LP vinyl compilation is a tangible thing, a must-have for the fans with some new photos from the band’s first video and all the info, credits and lyrics of the songs. Remastered & compiled on this deluxe 2LP with a special etched D side. The inner sleeves include some reactions triggered in the national printed press at that time. Are we lucky that it was before the social media took over?

Highlights of the release:

“RENDEZ-VOUS IN MÜNCHEN”, for the first time on vinyl!

“At the ESC we performed Rendez-Vous, a ‘minimalistic synth-pop song’, accompanied by the Dieter Reith Orchestra, directed by Freddy Sunder, on a backing track with synthesizers and drum machines. Apart from the Eurovision broadcast on 23 April 1983, this (mono!) recording was never released before. We’ve put it on this compilation, together with 4 other alternative versions of the original song.”

“Cardiocleptomanie was part of the compilation ‘The Hidden Tapes’ by Minimal Wave in 2011. It was also the title of a personal compilation of our songs by Veronica Vasicka of Minimal Wave (sold out vinyl). It became our N°1 digital track (thank you Lieven De Ridder).”

“On our mini-LP Des Tailles (Parsley, 1982) we covered Mani Meme, an unreleased song by DE NOTA. To our happy surprise, the song was chosen by the GUCCI Epilogue collection 2020 for their campaign video. It boosted our audience internationally.” 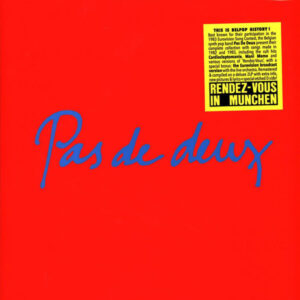