Alain Pierre’s previously unreleased score to the first-ever dedicated Druillet documentary, Ô Sidarta, backed with a rare recording of a one-off concert at the Université libre de Bruxelles in October 1976, revealing a very similar set of movements and soundscapes found on Ô Sidarta.

Within the elusive confines of this film awaits an unreleased album that defies categorisation by a musician who in a different time and space would be revered amongst some of the most important exponents of progressive rock, dark ambient, Krautrock and pioneering synthesiser composition – not to mention sound design and art-house film scores. As a protégé of François Bayle and Luc Ferrari who had studied classical music before immersing himself in found-sound manipulation and oscillators, Alain Pierre quickly became an enthusiastic go-to man for sound sculpture and technical studio proficiency in Belgium’s small film industry.

To the many generations of dedicated fans of the visual work of Philippe Druillet it might seem virtually impossible to adequately “score” the alien, futurist landscapes of the man who many called the “space architect” (on account of his space age reductions of Gothic cathedrals, Art Nouveau, and Indian temples), but once you have heard the sonic reactions of Alain Pierre on this the first-ever dedicated Druillet documentary, Ô Sidarta, complete with his own equivalent sound palette, it will be difficult to “hear” Druillet’s world via any other composer. Despite Druillet’s truly incredible record sleeve designs for projects like cosmic disco ensemble Black Sun, concept albums such as Attention by Jean-Pierre Mirouze (composer of Le Mariage Collectif), Parisian metal bands like Sortilège, gatefold portraits of Jimi Hendrix, later period albums by William Sheller and most relevantly on albums by Igor Wakhévitch (Docteur Faust, 1971) as well as separate releases by both Richard Pinhas and Georges Grünblatt (both from the cosmic prog outfit Heldon), it is fair to say that this criminally unreleased album by Alain Pierre would conjure up the closest synergy between sound and vision that either artist would come close to. The almost twelve of continuous music that Alain Pierre supplied for Ô Sidarta in 1974 fortunately appears in its entirety, unedited, as it does here for the first time ever away from its original broadcasts. Broadcast on Belgian and French TV that autumn, the film received a warm reception from Druillet fans, prospective film producers and space rock fans lucky enough to catch the short feature.

Throughout his career Alain’s commitment to conceptual music excelled within both cinematic realms as well as with the live arena. Never shying away from the constraints of transporting heavy synthesiser technolog and unpredictable analogue equipment to public spaces, Alain took his self-initiated “live” work very seriously. It was within his lesser-documented performances that you would find the closest sound to the music on Ô Sidarta, proving that the Druillet collaboration was naturalistic and conceptually close to Alain’s personal stylistic agenda. A rare recording of a one-off concert at the Université libre de Bruxelles in October 1976 reveals a very similar set of movements and soundscapes found on Ô Sidarta. This rare artefact has been included on the second side of this record under its original title Notions de physique intérieure (Notions Of Interior Physics) and stands as a perfect companion piece to Ô Sidarta – complete with a very similar “kit list” including the welcome addition of an Arp Sequencer, a Korg Vocoder and a Theremin (a back line whose total would far surpass any stationary studio of the era never mind a live show!)

By looking back at his original composition for one of his very first solo soundtrack commissions, Ô Sidarta, you can hear that back in 1974 Alain had already successfully managed to combine more unlikely musical influences, experimental techniques, and previously unheard soundscapes and studio tricks in to one twelve-minute score than most musicians fail to cram in to a whole discography. But still there is so much music yet to be discovered and Ô Sidarta is just the tip of the iceberg in the middle of a cosmic sea. Much like a character from one of Philippe Druillet’s books, Alain Pierre is a rogue pilot, steering his own ship in to the unknown, uncharted, unnoticed and quite unbelievable. 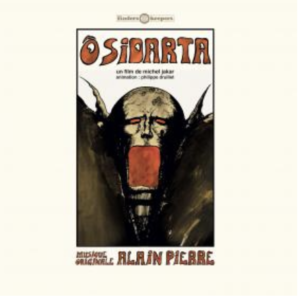