Mount Analog is 3 years old, and to celebrate we are having a little shindig with some of our good friends coming by to DJ! AND ALSO A SALE!!!!

plus 15% off everything in the shop all day long, and for our out of town friends, you can use the promo code THREEYEARS at check out on our webshop to get the same discount. 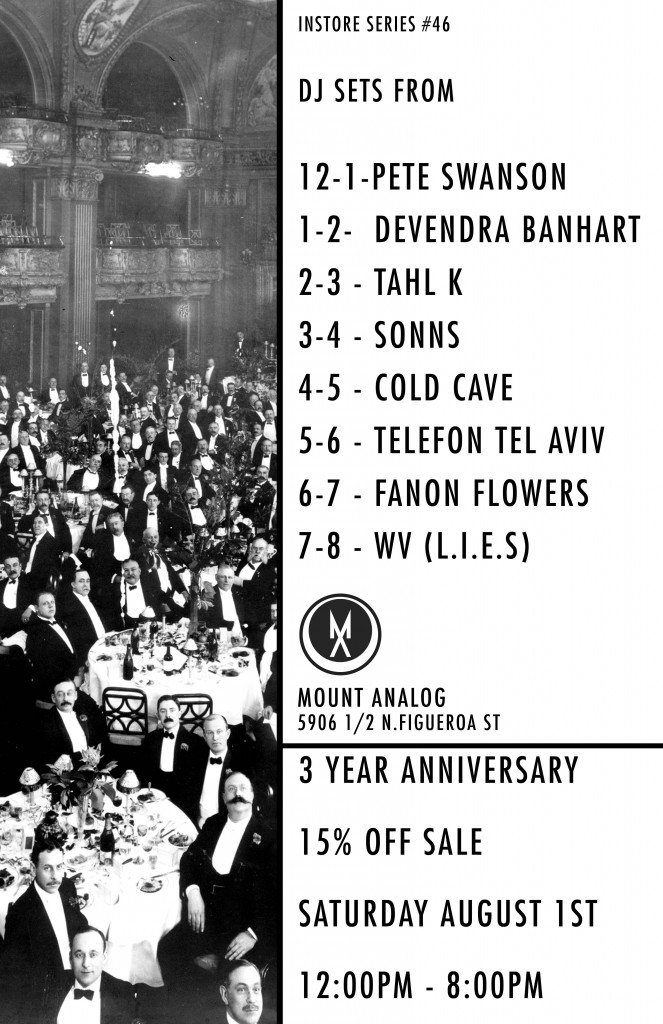 Upcoming on Downwards Records North America is ‘Wet Vision’ from DVA DAMAS. Taylor Burch (whom also plays in Tropic Of Cancer’s live outfit) has propelled this curiously cool cult Downwards fixture into an inimitable “technoir” soundtrack of a deviated youth future, for the next generation bande a part. Available now. Limited to 300 copies, first 100 on white vinyl via Mount Analog only. Exclusively manufactured and distributed by Mount Analog. Landing early February along with the second pressing of Marshstepper ‘A New Sacrament Of Penance’, also available to order now.

The Pre-Order is now up for Jealous God 05! 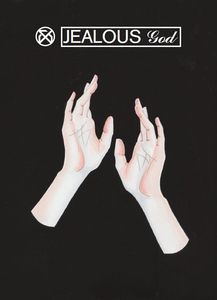 We are two years old this weekend…. And incredibly grateful to be here. So much to be thankful for, from the stories shared, important music heard, to the people we’ve met and impact we share on a truly global, diverse scale: Thank you. For 24 hours on July 13 (Sunday) take 15% off online using promo code 2YEARS. Come say hello and enjoy the discount in person between 12-6pm. Here’s to many more years of endless discovery!

LA’s premier techno label Droid Behavior and Mount Analog collaborate on a unique Interface / Nuit Noire experience for July 4th weekend. This event will feature many LA debuts, exclusives and follow ups from world class talent. Droid resident Drumcell will also round out the bill on warm up duties. Please rsvp to rsvp@droidbehavior.com to ensure entry.

*All ticket sales final, no refunds unless cancellation of event

*Once presales sell out, we will have tickets available at the door for walk ups

Techno according to Marcel Fengler has nothing to do with being a go-getter or having an alternative career, it is way more than means to an end: it is his definitive and concentrated passion.

In Marcel Fengler´s world, opposites attract. Ambient and electronica are equal parts in his sets that owe as much to the UK´s progressive school of relentless techno as they do to that special `Berghain sound´. A dictum created by music journalists and a description that is a diverging as Berghain´s resident DJs. Being one of them since day one, Fengler made his very own and self-confident contribution to that sound. He really knows his craft. Fengler´s DJ sets are characteristically offensive and dynamic, hard and consistent, but also surprising and emotional. In a realm that is dominated by technology and machines, his bright personality and the human aspect stay visible. You can feel his personal touch.

A similar versatility can also be found in his studio work. Marcel´s fondness for synth pads goes along with gloomy electro, hard and steady-paced techno doesn´t compete with his sense for moods and deepness. His search for different parts that work as a whole is as visible here as it is in his DJ style. Marcel Fengler looks for quality over quantity. Nothing leaves his studio that hasn´t passed this test. Neither artificial shortage of releases nor coyness, this behaviour is essentially Marcel Fengler: passion before purpose.

Berlin has no shortage of producers, DJs, and party promoters, but few match the quality, consistency, and enviable range of Henning Baer. As founder and resident of the esteemed Grounded Theory party and booking agency, Baer has been at the forefront of presenting innovative electronic music in Berlin while boasting vivid DJing and production skills that have made him an in-demand artist in his own right. Recently celebrating Grounded Theory’s 25th party, Baer has a reputation as a thoughtful curator that is reflected in in the thunderous techno he’s released on his own K209 imprint, as well as on Adam X’s Sonic Groove and Psyk’s Non Series.

K209 was set up in 2011 in collaboration with Milton Bradley, with the first releases receiving rave reviews on Resident Advisor and leading to Baer being named one of Tea And Techno’s “Ones To Watch for 2012.” Baer’s techno is raw, dirty, and uncompromising, with an immersive energy that has made him one of Berlin’s most sought-after DJs. In addition to his own Grounded Theory parties, Baer makes frequent appearances at Tresor, Arenaclub, and Stattbad, as well as becoming a recent favorite at the renowned Berghain, where his sets explode with ballistic energy well into Monday morning.

Baer is moving onward and upward in 2014, with high-profile records such as his just-released Seltene Erden on Sonic Groove and more coming on K209 to add to an already significant discography. K209 releases continue to fly off the shelves at Hard Wax, with key selectors recognizing their quality and effectiveness as dancefloor weapons. As a DJ, producer, and promoter, Henning Baer is sure to be shaping the face of techno for years to come.

Sigha is one of the Key figures to emerge from the newly resurgent UK Techno scene. Releases on James Ruskin’s Blueprint Label, Hotflush Recordings and Remixes for CLR, Perc Trax, Mikrowave, Echocord, Shifted’s Avian Label, and Token to name a few have blurred the lines between the abstract and the dance floor. A huge supporter of Vinyl, he set up his Our Circula Sound stable in 2010 to create a home for his specific vision of Techno. Sigha’s sound blends traditionalism with a deep take on sound design and atmosphere, and his ability to translate this into uniquely balanced DJ sets has seen him play regularly at the world’s most prestigious venues.

Alien Rain is the result of Berlin techno producer Milton Bradley’s acid endeavours. Milton Bradley debuted in 2009 with his own imprint Don’t Resist The Beat!. Since then there have also been releases on Perc Trax, Prologue, Zooloft and others with music ranging from subtle beat experiments to industrial four-to-the-floor power tracks.The Alien Rain project has derived in a series of 12″ records, leading to conceptual live performances.

One of the most highly respected acts in both techno and industrial circles, Orphx have been developing their signature fusion of hypnotic rhythms and experimental noise for the past twenty years. Using modular and analog synthesizers, software, location recordings and feedback circuits, Rich Oddie and Christina Sealey draw upon the darker, psychedelic fringes of electronic dance music and combine these elements with the experimental aesthetics and themes of early industrial music.

Orphx have gained an international following as one of the pioneering acts within the European ‘rhythmic noise’ scene and more recently came to the attention of techno fans through a series of acclaimed 12″s on Adam X’s Sonic Groove label along with remix work for artists like Perc, Oscar Mulero, Traversable Wormhole and Svreca.

Oddie and Sealey have performed around the world and are renowned for improvised live sets that combine software with modular synth hardware. Appearing at venues and festivals like Berghain, Tresor and Mutek, they have shared the stage with artists such as Alva Noto, Laurie Anderson, Ben Klock, Marcel Dettmann, Monolake, and Pan Sonic.

Orphx has released nine albums and numerous singles on vinyl, CD and cassette that have had a significant influence on many of the artists in the present wave of industrial techno. Building on a sprawling back catalogue that stretches across the divisions between industrial, ambient and techno, their recent output has demonstrated that they are both pioneers and innovators in the fusion of rhythm and noise.

Drumcell is the founder of Droid Recordings and co-founder of Droid Behavior along with Vangelis and Vidal Vargas of Raíz. Since the mid Nineties Drumcell has been a firm believer in the power of techno and over the past decade become one of the America’s greatest champions of Techno and electronic music. 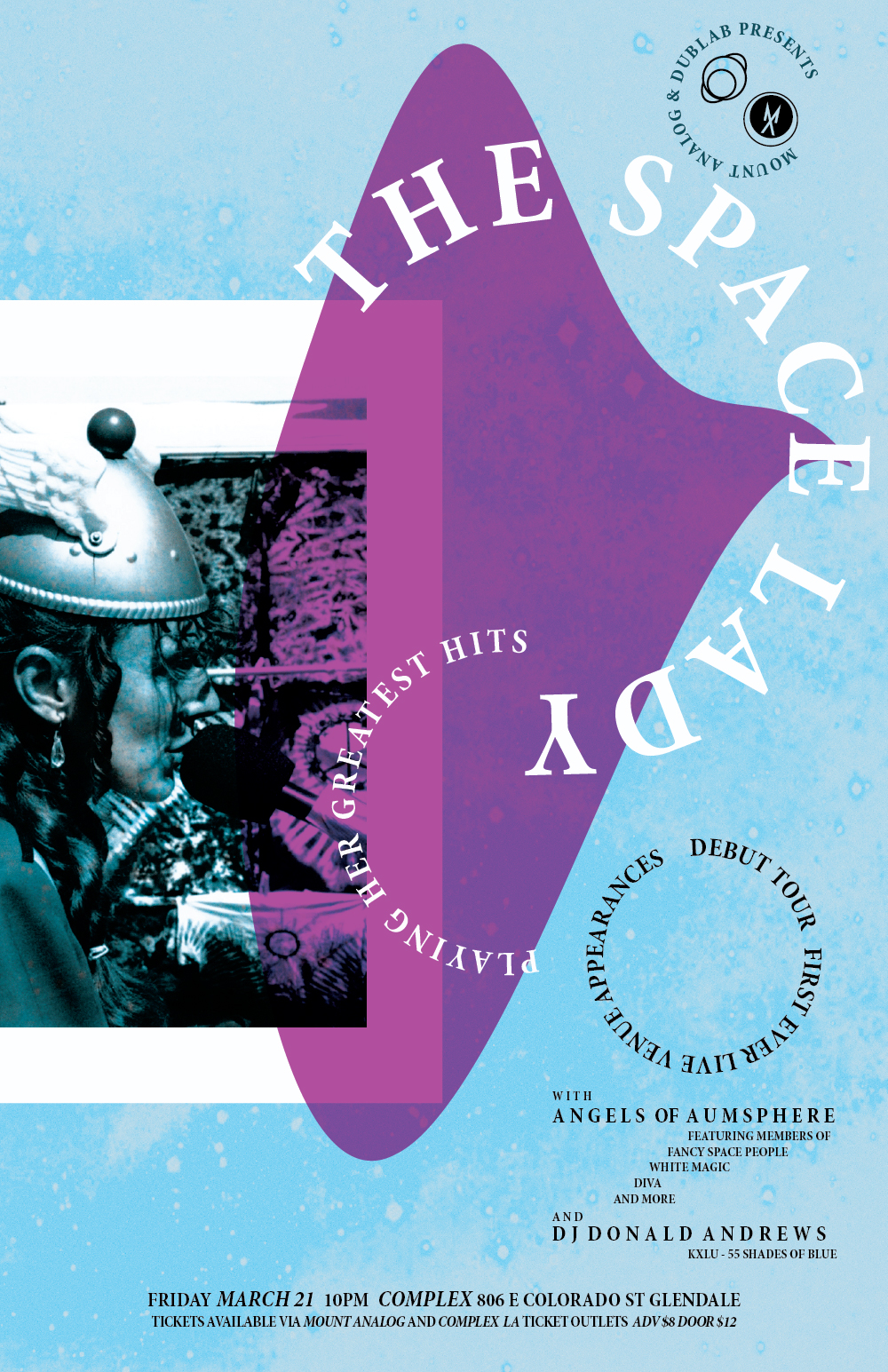