Minimal Wave is honored to present West View, a double LP of rare demos and newly remastered classics by UK duo Vicious Pink. Vicious Pink was an electrifying synth-pop duo formed by Josephine Warden and Brian Moss, who met in a smokey Leeds nightclub in 1979. The pair formed their band Vicious Pink Phenomena and soon after went on to provide gloriously off-kilter backing vocals for their friends, Soft Cell, completely unrehearsed. Later, they dropped Phenomena to simplify their name. Between 1982 and 1986, they released seven singles that all reached the UK dance charts, despite the fact that their ambitions never lay in commercial success. To this day, their music remains artful, catchy, and provocative. West View compiles material from their early days together, featuring previously unreleased demos as well as newly remastered classics like Cccan’t You See and My Private Tokyo. The double LP is housed in a glossy heavyweight sleeve, accompanied by a 12-page LP-sized booklet featuring the duo’s entire ‘how it happened’ story, unpublished lyrics, and unpublished photos from those early years. The double LP is limited to 999 copies, half the pressing is on neon pink 160-gram vinyl the other half on 160-gram black vinyl. All orders made directly through our website or our Bandcamp site will be accompanied by a 6” x 9” postcard of an unpublished photograph of Vicious Pink. Release date: February 14th, 2022. 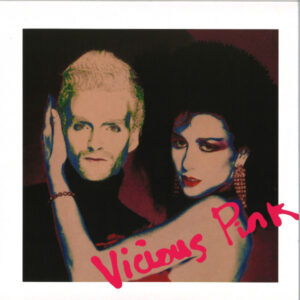