2015 repress; originally released in 2010. The psychedelic synthesized world of Kuckuck label stalwart Sam Spence. Born in San Francisco in 1927, Samuel Lloyd Spence is a peculiar piece in the komplicated krautrock puzzle. As an American expat working in a community of German rock musicians in the early ’70s, Spence shared his alien status with the likes of David Johnson and Malcolm Mooney (Can), Carole Muriel (Brainticket), Maria Archer (Embryo), Bill Barone (Wallenstein), and the band Sweet Smoke, but in Spence’s case it wasn’t the free love and communal living that attracted him to Germanic pastures — Spence’s European travel plan was academic. Over a decade earlier, Spence had travelled from California to Paris to study “serious music” composition at the École Normale de Musique with the great composers Arthur Honegger and Francis Poulenc, where he conducted alongside Jean Fournier. His original roots playing clarinet and sax in Californian swing bands had led to paid work as a composer for commercial Hollywood groups, which led in turn to a part-time interest in electronic instruments and the development of the synthesizer. Spence was able to use his Hollywood credentials to score German TV commissions making dozens of groovy symphonic scores with electronic flourishes; toward the end of the decade, with the help of a long-term contract for composing motivational music for the National Football League, Spence had raised enough capital to bring one of the very first Moog synthesizers to Germany. While in Munich Spence met Kuckuck label owner Eckart Rahn, and the pair discussed the idea of recording an LP of electronic music that would appeal to ambient and experimental enthusiasts who were searching for cosmic sounds after the rise of bands like Kraftwerk and Tangerine Dream. After the release of two Moog-fueled singles, including a cover version of Focus’s 1972 hit single “Sylvia,” Rahn agreed to release Spence’s debut LP of synthesizer based pop music, which would sit among his eclectic Kuckuck roster that included the minimal electronic pulses of Deuter, the experimental field recordings of Ernst Schultz, and the avant-garde releases of Peter Michael Hamel and Terry Riley. Having continued to expand his successful career in symphonic music, Spence would, by the end of the 1970s, return to orchestral film music, seizing further opportunities to work as a composer and recording over 500 cues for films made by the NFL back in his native USA. 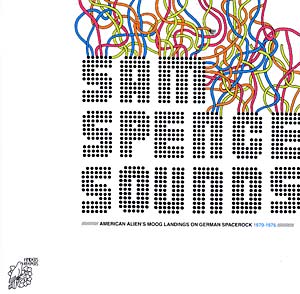