Mondo Groove present a reissue of K.Bytes’s I Adore Commodore – Computer Music Flash, originally released in 1983. After the creation of his 1982 album Computer Disco (MGLP 101LP), Marcello Giombini produced I Adore Commodore – Computer Music Flash a year later, which was mainly made with a Commodore 64. Giombini was a veteran of music applications with personal computer. Starting with an Apple II Europlus, he then converted to the Commodore 64, thanks to the presence of three independent music generators that allowed him to make more elaborate music easier. The record was inspired by the videogames of the time, and the titles of the ten tracks are inspired by the names of famous games. The music was created using four-to-eleven Commodore 64s, programmed and synchronized with an external audio interface. At the time, Giombini, in his studio in a basement just a few steps from Nomentana, Rome, had organized a small school with courses of basic and computer music. The cover art graphic is the same of original LP; Comes with an inner-sleeve dedicated to Commodore 64. 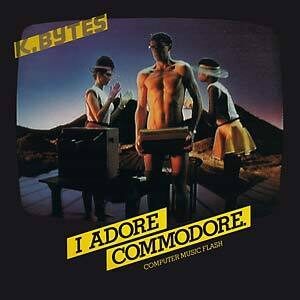