Fantome Phonographique present a reissue of Jean-Jacques Perrey’s Prélude Au Sommeil, originally released in 1958. Jean-Jacques Perrey was one of the earliest innovators in electronic music, creating a body of work spanning decades that has influenced everyone from Brian Eno to The Beastie Boys. One of the pioneers of musique concrète and electronic tape manipulation, Prélude Au Sommeil (“Prelude to Sleep”) is Perrey’s debut recording but shows a composer already at maturity. Originally released at the end of the fifties, as a private press under the fake institutional name “Institut Dormiphone”, Prélude Au Sommeil consists of two side-long tracks played on the Ondioline (George Jenny’s 1941 vacuum-tube based, spring-loaded electronic instrument). The music contained in this mysterious vinyl is like something between dreamy church organ hymns and the keyboard-based minimalism that Philip Glass and Terry Riley developed a decade later. The music of Prélude Au Sommeil was intended as sleep-inducing and tranquilizing for use in mental hospitals. It is unclear if the copies pressed actually had been distributed to mental hospitals or if the whole story was just a fantastical joke on the part of Mr. Perrey. This album is known as a precursor of what would later became known as “ambient music”, 20 years before Brian Eno, the Kosmic Courier and the American minimalists. Something vaguely similar to Prélude Su Sommeil came about five years after its release, when in 1962 Epic Records produced the three volumes of Soothing Sounds For Baby from Raymond Scott. A droning/bubbling work of early electronic, Prélude Au Sommeil vacillates between playful and serious, light and dark, a truly beautiful piece from an icon of electronic music. Essential. 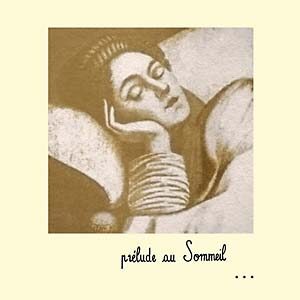