Minimal Wave is proud to present ‘Recordings 1980-1982’ (MW077), a triple 7” box set by pioneering south Florida synth-punk band Futurisk, in honor of their 40th anniversary. Founded by Jeremy Kolosine in 1978, Futurisk recorded many songs and performed live throughout the early 1980s. Though they had released two 7”s that sold out, had a legendary live show, and even some videos, by 1984 Futurisk was history. Eventually, the main core of Futurisk would be the Jeremy Kolosine, Richard Hess, and Jack Howard line-up though much happened leading up to this point.

In 1979, the teenage Jeremy Kolosine won studio time and money in a competition with his drum-machine-triggered guitar-synth act called ‘Clark Humphrey & Futurisk’. He decided to form a band around the name to record a more punk release titled The Sound of Futurism 1980 / Army Now. It was an ambivalent anti-war anthem with Jack Howard on drums, Frank Lardino on synth, and Kolosine on vocals and guitar synth. Many live shows ensued with the line-up which included Jeff Marcus on bass and Vinnie Scrimenti on drums but in 1981 a rift between the band caused them to part ways. They continued for a bit as ‘Radio Berlin’ (no relation to the Vancouver act) and Kolosine, who had gotten absorbed in a new analog synthesizer with sequencer continued as Futurisk.

He recruited synthesist and recording engineer Richard Hess who had a myriad collection of Moogs, Oberhieims, and CATs. Jack Howard returned on drums and syn-drums and the lineup for the Player Piano EP was cast. The EP, like the live show, was a strange blend of punk, minimalist, and disco-influenced electro-pop, with drum machine triggered synths and often frantic real drums all led by Kolosine’s schizophrenic Bowie / Ferry / Foxx adulations. It was recorded by Richard Hess and the band in the rooms of a friend’s house. The drum sound, recorded in a bathroom, rocks, even today. Reportedly, Futurisk may have been the first synth-punk band in the American South, and their 1981 track ‘Push Me Pull You (Pt. 2)’ was an early pre- ‘Rockit’ excursion into electro-funk.

The ‘Recordings 1980-1982’ box set includes three 7”s, an Army Now (1982) 7” Flexi, and a 16-page full-color booklet featuring unpublished photographs of the band, the history of the band, and an interview with founder Jeremy Kolosine. The three 7”s are The Sound of Futurism 1980 / Army Now which includes an unreleased track from the same session, the Player Piano five-song 7” EP from 1982, and the Ocean Sound 7”, which has not been released in this format until now. All three 7”s are remastered, pressed on heavyweight 70-gram vinyl, and housed in heavy color printed matte sleeves featuring the band’s original artwork. The box is case wrapped and depicts an early illustration of the band printed in black on white with a spot gloss. Limited edition of 600 copies. 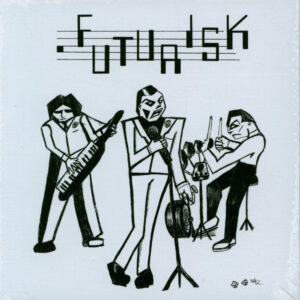