2014 release. Opening further doors in the sprawling labyrinth of unreleased music by Polish composer Andrzej Korzyński, Finders Keepers Records presents the soundtrack to the 1977 Polish film Człowiek z marmuru (Man of Marble) by national filmmaker and long-term collaborator Andrzej Wajda. Presented for the first time ever on vinyl, this synthesizer-fuelled soundtrack marks a distinct stylistic maneuver toward a unique brand of Polish cosmic disco, celebrating the cinematic debut of Korzyński’s Arp-Life project — widely respected as Poland’s first synthesizer orchestra. Begging direct comparison to Russia’s Zodiac and sharing an uncanny resemblance to other 1970s European cinematic disco bands like France’s Arpadys or the later projects of Italy’s Goblin, this soundtrack features Korzyński and Arp-Life at their best, making fantastical and experimental musical approximations of the burgeoning synth funk disco boom which had erupted on the other side of the iron curtain. Man of Marble was Korzyński’s first step into electronic dance music, and with the addition of bonus tracks from the 1981 sequel Człowiek z żelaza (Man of Iron), it provides the perfect companion piece to his recently liberated score to Possession (directed by Andrzej Żuławski). Experimental and fantastical, and taking creative gambles as a necessity, Man of Marble’s over-the-top, synth-heavy score depicts a stark, ultramodern contrast, accentuating a plot that switches between past and present tense, illustrating a 1970s researcher who retraces spurious political events that occurred forty years earlier. As with most communist state-owned record labels, Polskie Nagrania Muza, which had previously released works by Korzyński, rarely encouraged the commercial promotion of film composers. Although Korzyński was an occasional exception to this rule (due to his previous career as a radio programmer, pop musician, and writer), Man of Marble would never be commercially released outside of the context of the film. This edition of Man of Marble provides further glimpses into a deeper archive of electronic pop, capturing prime-era Korzyński as a forward-thinking keyboard artist and experimentalist who managed to move with global musical and technological trends under the stifling communist regime. 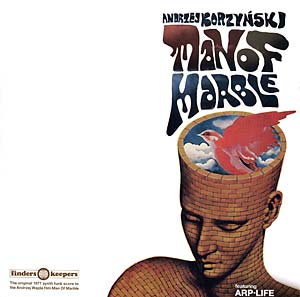