The World of Harry Partch collects three of his best short pieces. ‘Daphne of the Dunes’ (1967) is a side-long update of ‘Windsong’ written for dance. The melodic segments are given more emphasis than usual for a Partch piece, and harmonically this is one of his best with arpeggiated glides/cries of the Harmonic Canons evoking our sympathies. ‘Barstow — Eight Hitchhiker Inscriptions from a Highway Railing at Barstow, California’ was composed in 1941 as part of ‘The Wayward.’ It offers such statements as ‘Go to 538 East Lemon Avenue for an easy handout’ and ‘Looking for millionaire wife…’ This charismatic piece is successful due to the contrasting of Partch’s intoning voice with others in the ensemble and to increased instrumental emphasis. Last is ‘Castor and Pollux’ in a more modern performance than From the Music of Harry Partch, with greater vigor and fidelity. The World of Harry Partch is an excellent introduction to his works that comes highly recommended. 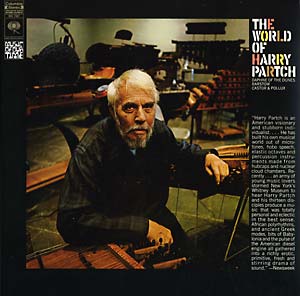