Maya Deren (1917-1961) was a Russian-American filmmaker and one of the most important voices in avant-garde cinema of the mid-20th century. When she decided, between the end of the 40s and the beginning of the 50s, to make an ethnographic film in Haiti. Deren not only filmed, recorded and photographed many hours of voodoo ritual, but also participated in the ceremonies. It was in working on this film that Deren recorded the Haitian musicians found on these sides originally released in the very early days of Elektra records. ‘Voices Of Haiti’ (here repressed as a 12″ with new mastering) -a beautiful artifact of percussion and chant heavy ritual music- is one of the earliest and best Western ethnographic documents of voodoo culture in Haiti. It is unmissable both for its historical value and for the beauty and spiritual power of the music it contains. Limited to 500 copies! 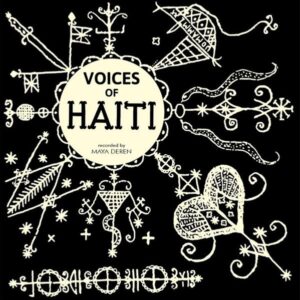