Shukai present their second release, music for the animated television film Alice Through the Looking Glass, never before released. The music was recorded in 1981 and the film was broadcasted on Soviet television in 1982. Alice Through The Looking Glass, created by Kyivnauchfilm studio and directed by Efim Pruzhansky, was a color animated film based on the novel by Lewis Carroll. Volodymyr Bysrtiakov is a Soviet analog to the French Vladimir Cosma or Italian Ennio Morricone. He was a great soundtrack composer whose most active years were in the ’80 and ’90s when he worked at the Kyivnauchfilm studio, whose audio department was like the British BBC Radiophonic Workshop at the time. The soundtrack for the animated film Alice Through The Looking Glass was an attempt to create a psychedelic electroacoustic piece with a Victorian flavor. The film animation style is similar to Terry Gilliam’s Monty Python cartoon clips. Gatefold sleeve; Obi; Edition of 300. 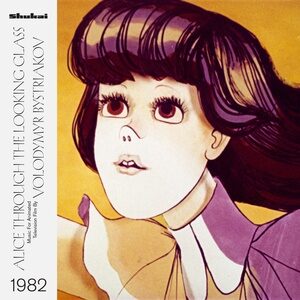 You're viewing: VOLODYMYR BYSTRIAKOV – Alice Through The Looking Glass, 1982 LP $35.00
Add to cart