Various Artists – The Ladies of Too Slow to Disco 2LP

With The Ladies of Too Slow to Disco, the How Do You Are? label takes a look at the women who kick-started the female pop revolution in the ’70s — not only covering the big names like Carole King, Carly Simon, or Rickie Lee Jones, but also unearthing lots of overlooked and lost gems of the 1970s LA music scene. As with the two previous Too Slow to Disco compilations, the goal is to reinstate a few unjustly overlooked talents. But above all this is about the music; that vaulting ambition that pours out of these arrangements, lyrics, and melodies, all played by the finest musicians the LA scene could muster. So take a trip and round out your picture of a decade. The style is still Too Slow to Disco. But the inspiration and the achievement is all woman. These much-loved compilations are the brainchild of Berlin cratedigger DJ Supermarkt, the musical luminary who brought J-pop to discerning Western ears back in the late 1990s with his Bungalow Records label and who has been a champion for the reappraisal of smooth music for decades. The first two volumes of Too Slow to Disco were both rightly acclaimed as Best Compilation of the Year by Rough Trade, and this installment brings together another kick-ass roster of lost pop gems. Includes 16-page booklet with liner notes. Includes tracks by Evie Sands, Rickie Lee Jones, Laura Allan, Melissa Manchester, Franne Golde, Valerie Carter, Teri DeSario, Carole Bayer Sager, Carly Simon, Jaye P. Morgan, Lauren Wood, Renée Geyer, Maria Muldaur, Brenda Russell, Leah Kunkel, Amy Holland, Carole King, Doris Abrahams, and Lyn Christopher. 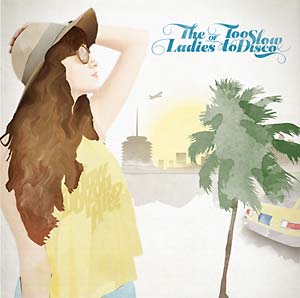 You're viewing: Various Artists – The Ladies of Too Slow to Disco 2LP $26.00
Add to cart