Strong Love explores the first wave of openly gay songwriting that emerged after New York’s Stonewall Riots kickstarted the modern gay rights movement in 1969. It took just a few years for the defiant chanting and interlocked arms of early 70s pride marches to reverberate onto record, and Strong Love begins with one of the earliest known recordings of openly gay songwriting, 1972’s A Gay Song by London hippie collective Everyone Involved. Across 15 tracks, the compilation takes in disarmingly personal folk, uplifting soul, outsider country and dark synth-rock. Eccentric one man band Chris Robison played with the New York Dolls and Elephant’s Memory, while LA glam seducer Smokey saw members of the Stooges and Quiet Riot pass through his backing band. Steven Grossman was covered by Twiggy and Scrumbly & Martin are justifiably infamous for their work with San Francisco drag hippies the Cockettes. The songs on Strong Love illustrate the vision, talent and raw courage that drove 1970s songwriters to sacrifice popular careers for the sake of honesty and self-expression. Compiled by Chapter Music’s Guy Blackman, with an evocative introduction from drummer Richard Dworkin (who played with Blackberri and Buena Vista and is one of the few to have witnessed many Strong Love artists firsthand), the album is a powerful tribute to pioneering artists whose music has been neglected for too long. 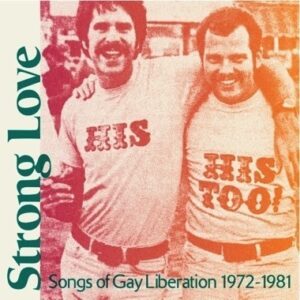