A North American road trip of coming of age garage soul mapped by Ivan Liechti, Ghost Riders is Efficient Space’s latest narrative compilation, hovering in a liminal emotional ravine between moonlight melancholy, teenage heartache and unchecked, unrealised ambition. Across seventeen open hearted ballads recorded 1965-1974, the 2LP collects and connects dots between British Invasion fanatics, child prodigies, the loners and the luckless, in a kind of trans-continental survey of those swept up in rock’n’roll mania and buoyed by local newspaper ads promising fame and gold records.

From the tangerine dreams of 8th grade all-girl combo The Mod 4 to the tri-state jukebox aspiring echoes of The Tempters, The Yardley’s poetic Farfisa vamp and lilting folk pop, and The Landlords’ weepy break up b-side blues, these are mostly one shots by dreamers whose experience was brief before being checked back to the reality of suburban normality and realistic career options. Hailing from the regional backwaters of Illnois, Arkansas, Nevada, Massachussets, Ohio, Idaho, Texas and beyond, the licensed artists were scouted by way of local fire departments, spiritualist fellowships and animal welfare centres, often barely a stones throw from where their contributions were originally laid.

A barely teenage Dennis Harte’s ‘Summer’s Over’ perhaps best taps the collection’s essence. A gut-wrenching lament of the passing of the season as if it was the last on earth. Flanked by players from The Left Banke, Harte, a now-piano tuner to the stars, is from the minor segment that found longevity in showbiz. Likewise with Michigan icon Lyn Nowicki who cast her ghostly voice over Beatles cover song chameleons The Common People and Jerry McGee, The Ventures member and conduit of Dr. John’s ‘Twilight Zone’.

Ghost Riders simmers with the scent of youthful summers, the pang of schoolyard romance, and the excitement (and disenchantment) of teenage naïveté, delivered via a deceptively simple and frequently wonky garage band set up. The vision of record collector and graphic designer Ivan Liechti, these eternal psych-folk howlers are further crystallised by Colin Young’s fastidious audio restoration, the original artwork of Elise Ganebin-de Bons and an aptly penned forward from Sonic Boom. 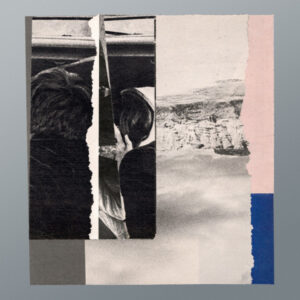