TOMORROW THE RAIN WILL FALL UPWARDS – Wreck His Days LP

Wreck His Days is dubbed-out cosmic pastorals and politically exasperated techno-exotica from Blackest Ever Black’s most secretive and shape-shifting project, Tomorrow The Rain Will Fall Upwards. Guest contributors include Conrad and Jonnine Standish of HTRK, Genevieve McGuckin (These Immortal Souls), and Lucas Santanna. The ghosts of Les Baxter, Rowland S. Howard and Nina Simone are also in attendance. But whoever is pulling the strings remains hidden. Structurally Wreck His Days recalls the grand collective statements of This Mortal Coil or Massive Attack, but musically its dreamlike overtures have more in common with Deux Filles, Global Communication, Arthur Russell or Penguin Cafe Orchestra. It roams far and wide: from near-Balearic piano loops of the title track, to the Audrey Horne-worthy death-jazz of “Ghost From The Coast” and the hulking, bass-heavy soundsystem weapon “Reverberasia”. The swelling, uplifting astral psychedelia of “…And I Tried So Hard”, while “I Beat As I Sleep As I Dream” reprises the bleak existential synth drift of T.T.R.W.F.U.’s extraordinary 2014 10″, How Great A Fame Has Departed. A deep-seated socialist impulse drives the whole thing. 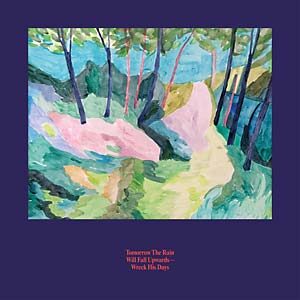 You're viewing: TOMORROW THE RAIN WILL FALL UPWARDS – Wreck His Days LP $22.00
Add to cart