To take a cinematic cue the record in question is the euro-trash-Pop equivalent of Jean Renoirs tragic / triumphant Boudu character who as a homeless, confused and desolate down-and-out plunged to the depths to be unwillingly rescued, resuscitated then after gradually winning the hearts of an entire family becomes respected and revered as royalty. Over 20 years after the mad scientists, Dr. Horst and Ackermann, first breathed life into this short-lived beast, brave and intrepid vinyl explorers have sporadically returned to the doors of ‘Dracula’s Music Cabinet’ to resurrect the sonic spooks and mutated melodies to share with nerds, mods, rockers, Hip-Hoppers, Psych-nuts and Kraut-siders alike. The lifeless corpses of ‘The Vampires Of Dartmoore’ that lay six feet beneath the belly of the ‘Eins Deutschmark’ bins has since crept through the record collections of the aforementioned social circles devouring continental currencies and demanding random ransoms of 200 Euros plus sweat, tears (of laughter) and a lot of blood. 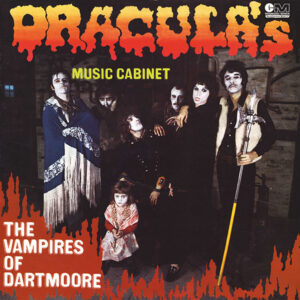 You're viewing: The Vampires Of Dartmoore – Dracula’s Music Cabinet LP $30.00
Add to cart