Repressed. Glossy Mistakes present the first official reissue of Takashi Kokubo’s Digital Soundology #1 Volk Von Bauhaus, originally released in 1985. Ambient and environmental Japanese scene has flourished stronger than ever over the last few years. The pioneers of this sound and the creators of an innovative way of making and understanding ambient music, such as Hiroshi Yoshimura, Yoshio Ojima, Toshifumi Hinata, or Takashi Kokubo have been championed and their works have been successfully unearthed by reissue labels. Continuing in this endless path, Glossy Mistakes adds Takashi Kokubo’s brilliant Volk Von Bauhaus to its catalog, with the Japanese masterpiece as the third official release of the Spanish label. As with most ’80s Japanese ambient and environmental music, Volk Von Bauhaus is an audio impression designed to give a multi-sensory experience to the listener. An effort to make things audible, an exercise of understanding, and sound tracking objects or situations. The main objective of this sound is to create an iconic musical landscape to accompany a specific place. Though his name might be unfamiliar to many, Kokubo has crafted music that has impacted virtually all of Japan, from national mobile phone earthquake alerts to contactless card payment jingles. He was one of the first artists to create ambient music strictly through loops. As he mentioned when release this album, “this recording used no keyboard players, no multitrack tape recording techniques, no analog sounds.” A shift on the process of imagining sound. Volk Von Haus is an ode to this ambient, new age, and environmental music created in Japan throughout the ’80s. Throughout nine cuts, Kokubo handcrafts his own sound and immerses the listener in a peaceful yet challenging adventure. The record is the first piece of his Digital Soundology series, and arguably his most interesting work due to the groundbreaking techniques he used. “A revolutionary musical expression that shatters the old values,” explains Kokubo about this piece. And it’s just what you can hear when you play Volk Von Haus. Reissue includes an unheard exclusive track by Takashi Kokubo and an insert with an interview made by Takashi Kokubo. A true gem that must land in every ambient head’s musical library. Remastered from master tapes by Frederic Stader. 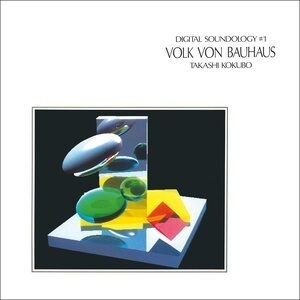