To honor Stephen and his impressive career as musician with Psyche (together with brother Darrin Huss) and as a solo artist, Artificial Dance decided to release his solo work on vinyl for the very first time. The Galaxy LP is a collection of 6 tracks recorded between 1983 – 2005 selected together with Darrin Huss. Belial, Quest 6 and Eternal City will be familiar to fans of Psyche as bonus tracks on the CD version of “Daydream Avenue”. Marooned In Step Time, Galactic and Rattlesnake are discoveries from solo archives that are being made available on a physical release for the first time.

Together with Darrin, Artificial Dance selected 6 tracks that give a complete overview of Stephen as a solo musician. These wide-ranging synth instrumentals were recorded between 1983 and 2005 and you can clearly hear the range of talent through the early Psyche influences to his further experiments in the electronic genre. Let Galaxy be your guide into this unique musical experience created solely by Stephen Huss.

All tracks are remastered by Darrin Huss, artwork by Steele Bonus.

This compilation is a dedication to Stephen Huss and all the great music he has done. 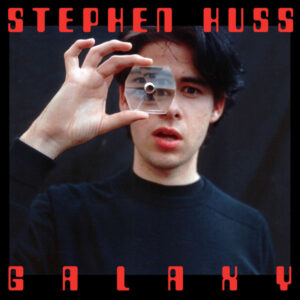