WRWTFWW Records announce the full official reissue of Somei Satoh’s magnificent Avatamsaka Sutra inspired Mandala Trilogy with one additional never-released piece. Sourced from original masters and available on double vinyl in heavy 350gsm sleeve with liner notes by passionate Japanese music connoisseur/collector/critic/DJ, Masaaki Hara. Deep deep deep into the abyss… The Mandala Trilogy blends Somei Satoh’s own slowed down Buddhist chant vocalization and early electronics to create a radiant and meditative atmosphere conveying serenity and timelessness. It includes three pieces recorded separately. “Mandala” was recorded at the NHK Studio of Electronic Music in 1982 and was included on the album Mandala/Sumeru, released on Kojima Recordings’ ALM. “Mantra” was an NHK commissioned work, recorded at the same studio in 1986. “Tantra” was recorded at Victoria University of Wellington’s Lilburn Studios for electronic music and recording in 1990. Included as a bonus is the 20-minute “Mai”, a composition commissioned by harpist Ayako Shinozaki and recorded at the Kioi Hall in Tokyo on November 11th, 2004. The piece was conducted by Tetsuji Honna and performed by the Kioi Sinfonietta Tokyo. Satoh says: “The harp is one of my favorite instruments. Also, by combining my affectionate percussion instrument, the chromatic gong and steel drum, with the harp’s most beautiful tone, I attempted to bring out a mystical sound.” Although it is not an electronic music piece, the stunning composition elegantly complements the deep mystical world that Satoh expresses in his Mandala Trilogy. Mandala Trilogy + 1 is reissued in conjunction with Somei Satoh’s Emerald Tablet / Echoes LP (WRWTFWW 044LP). 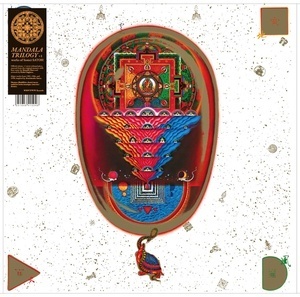