Satomimagae entrusts listeners with Hanazono, a compendium of miniature beauty, a sonic globe enclosed with subtly resonant energies. Satomi’s fourth full-length arrives as an invitation to revel in your immediate and imagined surroundings; to make time and space for guileless curiosity and garden variety enchantment. Hanazano, translated as “flower garden,” is a tribute to everyday mysticism, that sense of pure and private wonder excited by a stone, a river, or winds. Its often unplugged and affective register does not emanate from raw, emotional sources, rather a more devotional, process-oriented yet playful framework. Described by Satomi as a “small outer space,” this sound enclosure is a safe remove from the world where an artist can create, just for herself.

Satomi has transmitted three albums and a handful of EPs from this enclosure so far, situated in the environs of Tokyo. Her last album Kemri (2017), and Koko before it (2014), were released on Chihei Hatakeyama’s White Paddy Mountain. While incorporating textures not uncommonly heard in Hatakeyama’s own music, Satomi’s approach to writing has always favored form over the formless in a folk tradition. Still, Hanazono is an informal affair, encouraged by Satomi’s interest in music-making for the sake of musicmaking as inspired by her childhood memories and freedom.

Each song on Hanazono is dedicated to a simple theme, object or image, out of which grows uncomplicated melodies wrapped in layers of textural warmth, like a flower subtly moving in sway with its environment. Accompaniments of avian calls and electric guitar strata, added by Hideki Urawa, who also mixed Hanazono, suggest a spacious firmament above this burgeoning bed of earth. An ecology of simple, cyclical refrains are bathed in humming ethers, elegiac entreaties cross-pollinating with ludic and layered folk vibrations. These are songs, lyrically light footed and tunefully mellow. Every element has its place, blooming in synchronicity with its sphere.

Hanazono realizes a shift in the artist’s habitually intimate and introspective tendencies. Though there are perceptible shades to this space – suggestions of isolation and vulnerability – there is a balance of light which resonates outwards. There is a sense of seeing the world around with wide-eyes, and belonging to it. This way of looking and being is reflected in the folktale relief print illustration which covers the album, setting a scene of sanctuary and insight for this green, growing patch of sound. 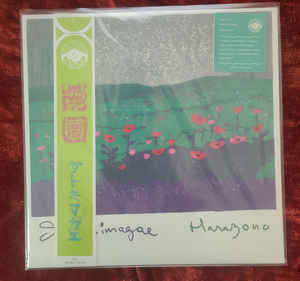