The core tenets of Morgan Wright’s music have long tested club music’s context; the rituals and customs that define it, and how each of those genres change once removed from their traditional settings.
It’s a space Morgan Wright feels at home in; one where he’s constantly asking questions of the structure club music resides within, and what it means to create a new space for familiar sounds. And over the course of his debut album, Class Tourist, Morgan has found new ways to elevate those same questions — whether by way of intention, or a pandemic-induced coping mechanism.

In Class Tourist, Morgan again borrows from familiar strains of the subgenres which have come to form his musical identity. This time, he fuses sounds of post-punk, IDM and breakbeat, hopeful they converge to form a bastardised rendition of the latter, with “Australiana” at its core.
It’s a sound that was made possible by a change to his songwriting approach, after pivoting from a loop-based production style — one which he has applied to a slew of other projects, for the better part of five years — to one which lends itself to a more standardised, contemporary format.

Moving through the record, Morgan toys with musical tropes of contrast with a calculated refinement unheard throughout his previous work. The coalescence of melodic optimism and bleak, mournful soundscapes feature on Class Tourist again, as you would expect. But this time, contemporary structure — with the exception of a few songs — along with the features of label-mate, Purient, and frequent collaborator, ENDL355, breathe new life, and even a new genre, into Morgan’s work. 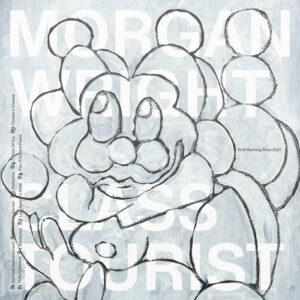