Masahiko Togashi’s cult classic, ‘Song of Soil’ was recorded in Paris in Summer 1979. It was just a few month after the Codona album release but unlike the landmark ECM album featuring Cherry, ‘Song of Soil‘ was only released in Japan at the time. Thanks to Japanese pianist Takashi Kako, who was living in Paris at the time, a session had been set up with Don Cherry and Charlie Haden thanks to Martin Meissonnier, a young journalist and radio producer, who was starting to make an impression on the Paris music scene. More importantly, Meissonnier was also Don Cherry’s right arm in Europe at the time. “I had met him at a concert at the Paris venue La Mutualité for an Art Ensemble concert or maybe it was Sun Ra and I offered to help.” he remembers. Paris at the time was a buzzing city and one of the most active epicentres of Jazz creativity thanks to the exodus of American free jazz musicians in Paris a few years earlier.

​Masahiko Togashi was, at the time, one of Japan’s most celebrated Jazz musicians. Born into a musical family he had quickly become a sought-after drummer on the Tokyo scene and a key exponent of the Japanese Free Jazz movement at the turn of the 60s, alongside guitarist Masayuki Takayanagi, pianist Masahiko Sato and saxophonist Mototeru Takagi. Despite an accident that had left him paralysed from waist down, Togashi became more active than ever thanks to a special drumkit that enabled him to play like before. He came to Paris to record ‘Song of Soil’ with the two American musicians who were touring Europe with their Old and New Dreams quartet (they’d played a concert promoted by Meissonnier at the Palais des Glaces on the 31st July). It was a period of intense creativity for jazz musicians and Don Cherry in particular. “Don would make films – in Sweden or elsewhere – would participate in lots of projects, a thousand things that I was not aware of. And then he kept asking me to set up different bands for him.” adds Meissonnier. Always on the lookout for new inspiring adventures, he agreed to do the session with Togashi and the musicians headed to the Ramses studio to record the album with Haden as the bassist.

​Recorded over two days and comprised of six Togashi originals, ‘Song of Soil’ is a superb blend of global improvisational interaction featuring Togashi’s deep abstract drumming, Don Cherry’s imaginary trumpet playing and Charlie Haden’s expansive basslines. Alternating between explorative sequences such as ‘June’ or ‘Oasis’ and meditative soundscape full of Eastern influences such as the title track, ‘Rain’ or ‘Words of Wind Pt2’ – the later highlighting Cherry’s beautiful flute playing – ‘Song of Soil’ is a mind-expanding voyage into the Fourth World.

Also present during the session was Don Cherry’s friend, photographer Philippe Gras who’d shot the cult legendary short film “Don Cherry” in 1968. Gras shot the session for the album release and artwork. For Meissonnier it was the beginning of a meteoric rise that would see him shape the global sound of the 80s with Fela Kuti, King Sunny Ade and Rai musicians. For the musicians, it was a solar experience. A key album in Don Cherry’s discography as well as an essential Japanese Jazz album, ‘Song of Soil’ is a unique meeting of the minds and it is reissued here in its original format augmented with an 8-page illustrated booklet giving a fascinating insight into this magical session that happened over two hot Paris summer days. 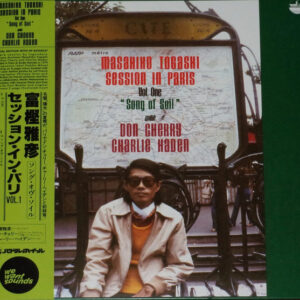