Lexachast is an ongoing collaborative work by Amnesia Scanner, Bill Kouligas & Harm van den Dorpel.Initially birthed as a joint, improvised performance between Amnesia Scanner and Kouligas at the ICA, London in 2015, it was later recreated and extended with visual artist van den Dorpel into a 15-minute online-only audiovisual work – known simply as Lexachast. Since then, it has expanded into a live show that has been performed at Transmediale, CTM Festival, Unsound Krakow & Adelaide, Next and LEV Festival and during Paris Fashion Week in collaboration with the brand Ottolinger.Whilst broadly inspired by the experience derived from and exposure to algorithmic patterns as generated by visual artist Harm van den Dorpel’s specially-devised program, the work is a sonic reference to the fallouts of avant-EDM and cyberdrone. This in turn is simultaneously mirrored by the perturbing visuals, created by a unique algorithm that sources and blends various filtered imagery from DeviantArt and Flickr in real time – with a bias towards the NSFW, extreme banality, and ornamental melancholia. The results were a perfect fit for the deliberate intention of non-intent, an anti-video of sorts, which ended up as a defining element for the project. 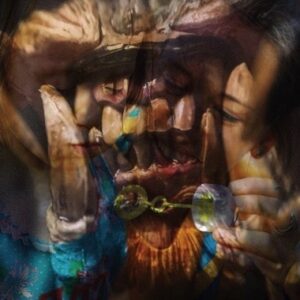