Be With Records present the first ever official reissue of Kimiko Kasai with Herbie Hancock’s Butterfly, originally released in 1979. The positively sublime and very rare Butterfly LP, recorded in Tokyo in 1979 by Japanese songstress Kimiko Kasai and jazz legend Herbie Hancock. Due to its super-rare status as a Japan-only release, this exquisite collection of covers never got the recognition it deserved at the time, despite incredibly inspired performances from Kimiko, Herbie, and the supremely talented musicians assembled for the project. From heavenly drummer Alphonse Mouzon and renowned organist Webster Lewis to bassist Paul Jackson, reedman Bennie Maupin, and the master percussionist Bill Summers, the legendary performers crafted amazingly good vocal versions of Herbie/Headhunters jazz-funk. Unsurprisingly, it has been heavily in demand for many years. The LP opens with Kimiko’s highly desirable version of “I Thought It Was You”, an elegant take on Herbie’s own anthem. Other superb re-workings include the delicately soulful “Butterfly”, jazzy groover “Sunlight”, the smooth and sexy “Tell Me A Bedtime Story”, and the beautiful ballads “Maiden Voyage” and “Harvest Time”. A wonderful example of perfectly understated and masterful jazz-funk soul fusion that shouldn’t be missed, the set closes with a jaw-dropping version of Stevie Wonder’s “As”. This lovingly curated reissue enables a long overdue reappraisal of this hitherto unavailable masterpiece. The stunning artwork which adorned the original jacket — complete with obi strip and sumptuous four-page folded insert — has been faithfully restored. Mastered by Simon Francis, and pressed on 180 gram vinyl. 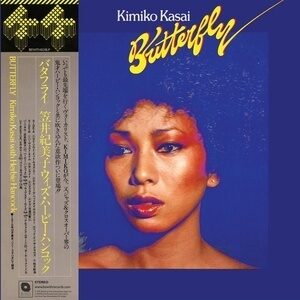