Throughout a long career in the visual arts, Jacques Charlier has maintained a multi-disciplinary approach that includes forays in poetry, underground comics, acting, filmmaking and music. Besides performing with his punk group Terril (sadly, never recorded), Charlier took inspiration from the minimalist sounds of Philip Glass, Steve Reich, La Monte Young, John Cage, and Meredith Monk. Throughout the 1970s he performed psychoacoustic pieces in Liège, Antwerp, Eindhoven, Rotterdam, Milan and Düsseldorf, and in the astounding performance art video Desperados Music, filmed by Paul Paquay for Belgian television. Charlier hit a creative stride in the 1980s — armed only with a synth, drum machine, fuzz box, and his custom guitar, with occasional duets with vocalist Martine Doutreleau. He recorded a trove of proto-pop tunes which he self-released on three cassettes (Musique Regressive, Chansons Idiotes and Chansons Tristes) between 1984–1987.

“Art In Another Way” collects selections from these tapes, in addition to an ample supply of previously unreleased material, all mixed and mastered from Charlier’s original 4-track recordings for a wide angle view of his creative range. From the proto-house rhythm of “Jingle – Crepuscule”, to the minimal EBM experiment “Top” and Art Of Noise- inspired “Passing Time”. There are certain resonances within the catalogs of Belgian labels Crammed Discs and Les Disques Du Crépuscule, yet even with these genre-bending precedents, Charlier’s music is idiosyncratic and visionary to the extreme. Accompanying the release is a postcard featuring a behind-the-scenes performance photo and visual score by Charlier. 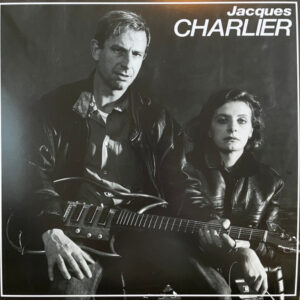