Before he co-founded the legendary Sunday afternoon event Body & Soul with fellow New York DJs Danny Krivit and Francois Kevorkian in 1996, Joaquin “Joe” Claussell was the driving force behind Instant House, an eclectic production outift who released a series of uplifting deep house records, several of which were spun by David Mancuso at the 90s iteration of his influential Loft parties.

During the winter of 1991, Stan got together with one of his best customers, Tony Confusione, to make music. A wall street guy by day and a keyboardist by night, Tony was also a serious DJ. Not long after their first recording sessions, they invited another Dance Tracks fixture, Joaquin “Joe” Claussell, to join them in Tony’s state-of-the-art home studio in Long Island. He brought a vibrant, percussive edge to the sample-based tracks Stan and Tony were cooking up. Emboldened, the three DJs began recording together as Instant House. That year, they released the Dance Trax EP.

In 1992, after Instant House had dropped two certified classics, ‘Over’ and ‘Awade’, for Jungle Sounds Records, Stan exited the group and sold Dance Tracks to Joe and his business partner, Stefan Prescott. Following Stan’s departure, Joe and Tony headed into the studio for a special recording session. “I just remember how powerful the connection was while we were making that record,” explains Joe, recalling the creation of ‘Lost Horizons (The Mind Travel Saturday Night Sunday Morning Mix)’. “It was a very spiritual encounter in the studio.”

While laying out the drum patterns, sound effects, and arrangement, Joe explained the vibe to Tony, who played the lush cosmic chords and an effortless keyboard saxophone line over the top. “That was Tony completely feeling himself,” Joe reflects. “He performed majestically.”

After the release of the Lost Horizons 12”, Joe received a phone call from Cisco International Corp. A plane flight later, he was sitting in their label offices in Tokyo, talking to a senior record executive who wanted to introduce Lost Horizons to Japan. “What they were primarily doing at the time was pressing classical records – we’re talking thousand dollar plus classical reissues – and they wanted to license and distribute Lost Horizons,” Joe remembers. Three years later, Joe and Tony released ‘Asking Forgiveness’, their final 12” as Instant House, before parting ways with full hearts.

In the context of his career as a DJ, remixer, and producer, Joe is known for long songs and compositions. As Lost Horizons illustrates, he’s carried that impulse with him since his foundational days. “When I produce, I don’t believe in the beginning or endpoint of anything,” Joe explains. “I really despise the rules. To me, that’s not true to the art of creation. I just believe there is a flow in creation. When we were making music in the 90s, we were restricted by format, but that record could have gone on forever.”

The 12” is housed in a full sleeve jacket by Bradley Pinkerton based on the original release design. 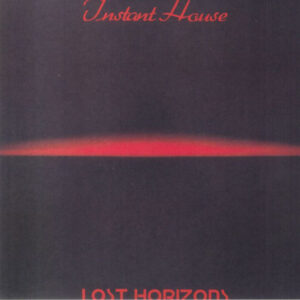