LA based composer/sound designer duo Heliochrysum announce the release of their visceral, deep and exploratory debut album We Become Mist. The album has been mixed by Ben Frost and mastered by Valgeir Sigurdsson.

Heliochrysum is the world building meeting of Michael Deragon and Daniel Lea
( L A N D, Important Records), in which a collaboration becomes a sculpted journey into new aural and imaginative cosmology. We Become Mist uses analogue and digital processes to mine the depths of industrial and science fictional, psychedelic soundscapes, often cinematic in tone and texture.

Taking their cue from a shared palette of sounds, textures and rhythms, Heliochrysum create a unifying score that is at once improvisatory and sonically certain. We Become Mist is nothing short of the progression from a souterrain awakening to the terraformed sound of a new world coming into existence.

These tracks overlay analog sound sources, digital hard wrought processing and visual sound design, constantly morphing and turning on their own searching torque. Mixed by Ben Frost and mastered by Valgeir Sigurdsson, the accumulation of sheer vision and depth is transportative, if not outright mind wrenching. In between this melding of the analogue and digital was mixed another element: the album is tinged with psilocybin technology. As a listener you can hear as you move through a psychedelic passage, like out of a state of lockdown into one of alien otherworldliness.

The piano, industrial crescendo of ‘We Remain Beneath’ is evidence of this, sounds modified into careful, lush arrangements. ‘A Future Unfolds’ sounds like a burnished unfurling, a resplendent distortion bringing to mind some epic revelation while tracks such as ‘Infinite Dark’ or ‘Pre Dawn’ bristle with chrome pulses that burn with alarm and dulcet drama.

Just as they did with their palette of sounds, Heliochrysum taps into a wide range of emotions from hope to devastation, growth and contagion.

The name Heliochrysum evokes the Latin for sunflower but also a healing tincture: in the overlaid orchestration and distorted lightness, the roiling, life-giving pour of the sun can be heard. Simplicity washed with emotional intensity, the remembered dreams of far-off, science-fictive discoveries. 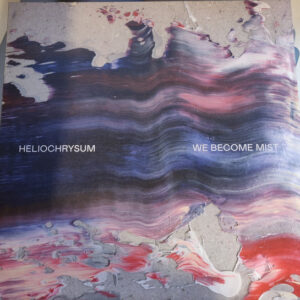 You're viewing: Heliochrysum – We Become Mist LP $25.00
Add to cart