Cremation Lily’s debut album for The Flenser, Dreams Drenched in Static exists at the convergence of consciousness and disintegration. Artist and multi-instrumentalist Zen Zsigo’s ingenuity and vulnerability is on full display throughout the course of the album’s ten tracks — glacial soundscapes float alongside earnest lyrics that capture the author in the midst of collapse.Written throughout a culmination of years of chaos, Dreams Drenched in Static serves as part diary and part comfort blanket. The album was penned over countless sleepless nights and documents the liminal moments at the edge of sleep and the distressing thoughts that often accompany late-night R.E.M. disturbances. The lyrics were largely written in the darkest hours of the morning and serve to evoke reflection, depression and meditations on death that seem to haunt these early hours.
Through the use of radiant tape hiss and degradation, guitar noise, frenetic vocal melodies and field recording samples, Cremation Lily creates a distinctive sensory experience. At times ambient and atmospheric, at others meditative and euphoric, Dreams Drenched in Static floats back and forth from fantasy to reality. Zsigo’s penchant for creating and dismantling traditional songwriting by using one-of-a-kind home-modified devices such as cassette walkman, micro-cassette dictaphone, circuit-bent Casio keyboard, various sequencers and self-created and tape loops weathered by nature and environment, creates an aqueous and all-encompassing aural encounter. Zsigo comments, “The processing on the album and the concept of it is a product of how it was made. After expressing pain and suffering in the recording of the songs, I was often completely numb and felt like all I could do at times was process vocal stems via cassette or record gentle streams to layer over the album. The LP’s fractured mood comes from that more than anything.”
For over a decade, UK-based Cremation Lily has explored countless subsets of underground music and has consistently defined and redefined its boundaries. Continuing to defy genre, Cremation Lily presents the project’s most intentional and developed work to date with Dreams Drenched In Static. 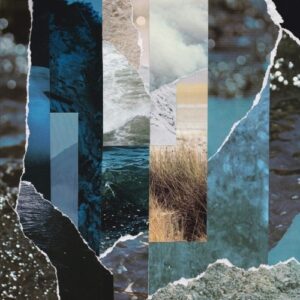