“This album saw Conrad Schnitzler head further in the direction of pop music. Like Consequenz, Con 3 (1981) is a collaborative effort with Wolfgang Seidel, alias Sequenza. Con 3 is a really odd mixture of numerous ingredients which Schnitzler was capable of combining with dexterity and taste. His musical handwriting is immediately apparent in the foreground. Effervescent electronic sequences can be heard on all nine pieces, coming from somewhere and appearing to go wherever — this is Schnitzler alright, this is his musical utopia. Then Wolfgang Seidel, formerly drummer with Ton Steine Scherben: an ideal partner for Schnitzler when it came to programming rhythm machines and sequencers for a minimalistic mesh. Another ingredient in Con 3 is undoubtedly German new wave (Neue Deutsche Welle, NDW). How could it not have touched Schnitzler? He lived and worked in Berlin! Above all, his succinct, absurd-surrealist lyrics would have suited many a protagonist of NDW. In this respect, Schnitzler revealed two hitherto hidden talents: his delivery of lyrics written by himself was both precise and incredibly assured. The fourth component of Con 3 is without question the character in the background, Peter Baumann. As producer and sound engineer, he was to Schnitzler what Conny Plank had been for Cluster and Harmonia and many others. His gentle, discreet impulses, his immense know-how with regard to modern studio technology and his perennial enthusiasm could be detected in all of the productions he created in his Paragon Studio. Years of working with Tangerine Dream honed his studio experience and his intuitive flair for electronic experiments. Those like Schnitzler who were able to work in the Paragon Studio were in exceptionally good hands. There could hardly be a more fertile alliance. Con 3 might have sounded rather disconcerting to Schnitzler listeners at the time. He had long since nailed his colors to the mast of the art scene (Fluxus, Beuys, performance art etc.) and now dared to attempt a balancing act between the high artistic aspirations of the avant-garde and the more entertainment-driven nature of pop music. Not for the first time, perhaps, but particularly emphatically on this album. Many had tried their luck at this tour de force and failed, not least because they lacked the necessary credibility. Not Schnitzler. He remained true to himself, and hence retained his credibility, integrating his new experiences and information resources wisely and creatively into his idiosyncratic and unmistakable music.” –Asmus Tietchens. Includes a printed innersleeve with notes from Tietchens. 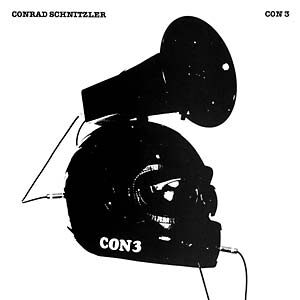