2022 repress. Trading Places present a reissue of Bridget St. John’s Ask Me No Questions, originally released in 1969. Blessed with a distinctive voice largely defined by a rich, cello-like timbre, the English singer and guitarist Bridget St. John was brought to the attention of the adventurous guitarist John Martyn by fellow singer Robin Frederick and after being introduced to him by Martyn’s poet friend, Pete Roch, was championed by BBC Radio disc jockey John Peel, who formed the Dandelion label in 1969 (with Elektra record-plugger Clive Selwood) specifically to issue St. John’s music. Recorded in a brief session that lasted for some nine or ten hours, debut album Ask Me No Questions features Martyn on second guitar on opener “To Be Without A Hitch” and the equally chilling “Curl Your Toes”, as well as the haunting title track, while future Fairport Convention and Soft Machine member Ric Sanders appears on “Lizard Tongue Boy” and “Many Happy Returns”. Licensed by Cherry Red. 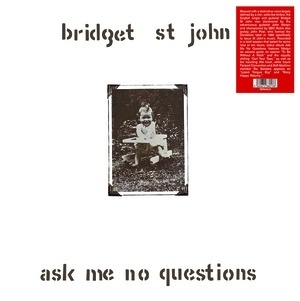