There is not much information to be found online about Bliss Inc., whose Hacking the Planet EP comes out on Radiant Love this summer. Beyond the fact they’re named Alexander and hail from Saint Petersburg, the project is cryptic – somehow this is fitting for a set of songs that could’ve fallen out of an obscure 1994 catalogue. This is the year of Robert Leiner’s Visions of the Past, Opus III’s Guru Mother, and Paul Oakenfold’s BBC-1 Essential Mix: an aesthetic region in which tech and new age spirituality braid together, a time before this synthesis reached Silicon Valley; while it still lingered in the rave, incredibly sincere, everything sounded kind of wet, and the efficiency of spirit was means to no end but a state of bliss.

What keeps Hacking the Planet from falling into pure nostalgia is its tuning – the palette of 1994 has been lifted and run through a delicate sensibility. The title track is a piece of buoyant, airy trance, with orbiting filters and a set of loopy, very vocal synths. It bumps along at 130 BPM, but feels slower because of the ease and clarity with which the track progresses. “Infinite” has got the aquatic motifs and soft, panning cymbals of a set-opener, or a comedown jam. The break that swings in after a minute-thirty feels less like a punctuation than another stream of sonics joining the flow. Picking up the pace a little, “Transitions” opens with a whir that could issue from a field of crickets or a stack of hardware. The entrance of the bassline was the first moment in this EP one could call nasty. But its drive and weight is also tempered, played against by a clever drum break, a run of piano keys, and the ethereal reverb-washed vocal sample we expect in a piece of classic mid-90’s trance – absent, however, is any kind of signalling to Goa, “exoticism” or indigenous aesthetics. (1994 was also the year of Jean Paul Gaultier’s Les Tatouages collection, which, for all its romantic nomadism and deft tailoring and syncretic spirit, has no need of a 2020 update).

Bliss Inc.’s songs stream, rather than track – one gets a sense that the elements flow in and out rather than ride a structure. Sansibar, who provides a remix of “Hacking the Planet” to round out the EP, is solidly a producer of tracks: often electro-derived ass-shaking material that hits, and hits in recognisable sections that progress serially. His version of the title cut brings in a hefty acid baseline, jungle-style stretched vocals, and kicks out of the 4/4 grid. But let there be no mistake, this is a producer also quite capable of coaxing delicacy out of hardware. The chimes of the lullaby-like breakdown halfway through the remix sound like nothing but a ghost in the machine. 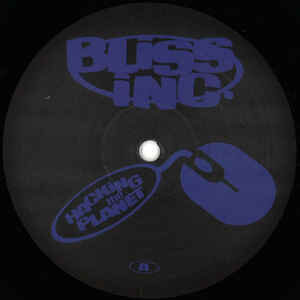