From the same vibrant cinematic landscape of ’70s studio supergroups as Goblin, The Pawnshop, The Feedback, and The Braen’s Machine comes the Magnetic System, the Italian incognito dream-team composed of Milano prog keyboardist Vince Tempera, Cinevox sibling Franco Bixio, and video nasty maestro Fabio Frizzi (whose career it launched). Bridging giallo jazz-bass-driven prog and the arrival of home studios and synthesizers, the film music of the Magnetic System marked a sea change in Italian genre film music, promoting melodic electronics to the forefront of Italian pop culture and preempting the first murmurs of Italo disco and synthpop. Masterminded in the mid-’70s at the apex of Italian film music’s most exciting transitional period, the Magnetic System was created to encapsulate the combined efforts of three of the country’s most prolific and adventurous soundtrack composers and retarget their lauded behind-the-scenes personas toward the Italian commercial instrumental pop market. In the early 1970s, with a climate that nurtured instrumental rock such as the work of Franco Battiato, Sensations’ Fix, and Le Orme, the soundtrack specialist label Cinevox (founded by Cesare Andrea Bixio) identified opportunities within their roster, finally finding chart success with the rebranded writing team known as Goblin. By 1977 the union of Franco Bixio, Fabio Frizzi, and Vincenzo Tempera as the Magnetic System would join a list of retitled outfits like The Pawnshop (featuring Alessandro Alessandroni, Giuliano Sorgini, and Giulia De Mutiis), The Braen’s Machine (featuring Alessandroni and Rino De Filippi), and The Group (a drum-heavy version of Morricone’s Gruppo di Improvvisazione Nuova Consonanza), all of which took brief hiatuses from their soundtrack and library music day jobs to throw overqualified prog pop on the commercial craps table. The unfortunate low demand for these ambitious unchartered excursions resulted in small runs, which (with time as a healer) would cause future record collectors to salivate — the one and only 7″ single by the Magnetic System being no exception to this phenomenon. Also experimenting under further alter egos such as the day-glo Fruit Of The Gum and the Spaghetti Western-cum-disco Benjamin Franklyn Band, the group’s third moniker, the Magnetic System, specifically showcased the trio’s more aggressive, brooding, and heavier sound in comparison to its sister groups. This compilation gathers a wider selection of the trio’s compositions that fall within the stylistic parameters of the Magnetic System’s creative blueprint; culling drum-heavy synthesized psychedelic soundtracks with sympathetic leanings to the white funk/cosmic disco murmurings of the era. 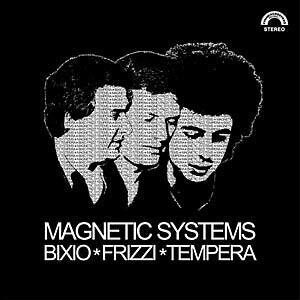