“The Outer Edge is proud to present the first ever vinyl release of “No Message” by Art P, a still lesser known and lost masterpiece from the P.A.P. archives. Art P (initially Art Programming) was an electronic music duo consisting of Jens-Markus Wegener and Frank Grotelüschen. On “No Message”, originally released in 1985, we hear the band’s most profound work, a detailed and unique mixture in between of Electro and the synth-laden edge of New Wave.
We initially discovered Art P on the tape compilation “berlincassette 2-85” a couple of years ago. Their contribution, the title track from their second and last album “No Message”, blew us right away: punchy drum machines, heavy synths and cool female vocals delivering a serious, yet slightly ironic view on the meaninglessness in pop music having “no message”. A couple of months later, when we finally were lucky to get hold of an original full length tape, we couldn’t ask for more: powerful apocalyptic Synth Wave on “A Place To Fear”, thrilling vocoder Electro Funk on “Polaroid”, uptempo New Wave Synth Pop on “Sounds of the City”, dreamy and melodic Electro on “Without Jackets”, and other well produced tracks. It was an absolute necessity for us to get in touch with Art P and ask for permission to re-release their music on vinyl.

“No Message” was remastered from the absolute best original tape source and sounds incredible. The release is limited to 300 copies and will be pressed on blue vinyl. It contains an insert with lyrics and additional art. We think it is safe to say, that this should not be missed!

As a side note it should be mentioned that Wegener later became a key figure in the German music market. He was the founder of companies such as Public Propaganda, Europe’s largest and most successful promotion agency in the mid ‘90s, the publishing company AMV, the distributor PP Sales Forces, among others. As a freelance promoter for SPV and the PIAS label he was responsible for establishing the term Electronic Body Music as a musical genre. Grotelüschen was active as a music journalist (e.g. for Spex magazine) and later became an important and well known journalist for science” 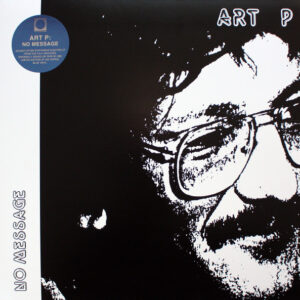