From the bizarre Polish-cinema-inspired imagery of the album’s artwork to the private-press aesthetics of the original LP, the Once soundtrack has long been a mysterious artifact among rare film and electronic music collectors alike. Written and directed by ‘the father of virtual reality’, the obscure art film is an allegorical tale of ‘Creation’ and ‘Destruction’ and the battle for humanity. With no surviving prints of the film traced to date, all that remains is the remarkable soundtrack. Composed by Israeli-born classical composer, Aminadav Aloni, the score is a collection of other-worldly spatial analogue electronics, field recordings and strong overtones of haunting Jewish liturgical music whose synergy create a soundtrack as beguiling and enigmatic as the film itself. Liner notes by Wire/Uncut journalist, Jon Dale. One-time limited pressing of 500 copies for the world. 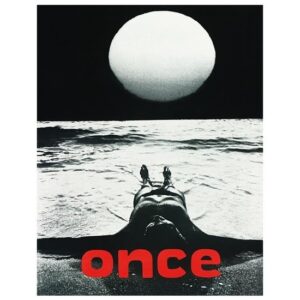