“First official reissue of Alice Coltrane’s gorgeous and hard to find 1982 meditation tape in its previously unheard original, unadorned organ and vocal mix, issued according to the wishes of her son, Ravi Coltrane. If you’re into anything from Alice’s uber-classique ‘Journey in Satchidananda’ to Kara-Lis Coverdale’s Minimalist masterpiece ‘Grafts’ – this one’s just utterly unmissable for what ails ya.

Perhaps the purest iteration of Alice Coltrane’s devotional music, ‘Kirtan: Turiya Sings’ captures the modal jazz innovator at a spiritual high water mark, chanting Sanskrit over free floating organ chords in a beautifully self-contained style. Originally issued on tape by Avatar Book Institute in 1982 in a fuller mix featuring synths and strings, this is the first time it’s appeared in its more stripped down, and arguably more affective, version with thanks to Alice’s son Ravi Coltrane, who’s helped bring it it to light via the legendary Impulse! label.

As name checked by a panoply of contemporary greats, from her nephew Flying Lotus and his Brainfeeder comrade Kamasi Washington, to Solange or Shackleton; Alice Coltrane’s music is a microcosmos unto itself, and, like Sun Ra’s catalogue, it can be difficult to fully grasp her scope. The relative simplicity of ‘Kirtan: Turiya Sings’ thus exists as one of the most welcoming entry portals to her sound, and is quite literally titled after her Sanskrit name, “Turiya” as in short for Turiyasangitananda, and with “Kirtan” referring to the act of “narrating, reciting, telling, describing, of an idea of story.”

Working quieter shades away from the ecstatic ‘Ocean of Love’ devotionals by Alice’s collaborator, Panduranga John Henderson (issued by Luaka Bop in 2017), the eight songs of ‘Kirtan: Turiya Sings’ speak to a richly immanent sort of pan-soul for the ages, offering mesmerising, enamouring space for meditation, or, on a more secular level, a worldly sense of serenity and peace that’s totally needed right now.” 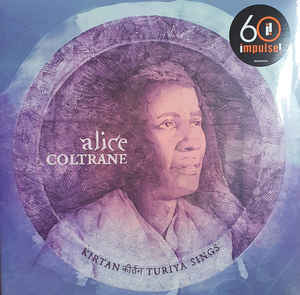