Lovely Music present a reissue of Robert Ashley’s Automatic Writing, originally released as an LP by Lovely Music in 1979. Over the course of Robert Ashley’s career his preoccupation with language and the voice took many forms. He became known in his librettos as a wonderful, funny, moving writer. But with Automatic Writing he examines language at a very “primitive” level — the human impulse make sounds to express his inner state, whether it be regret, embarrassment, fear, or happiness — even though there is no one else to listen. Talking to oneself.

“On Automatic Writing, Robert Ashley composes under the influence of his ‘involuntary speech.’ (In his liner notes, Ashley revealed that he suffered from ‘a mild form of Tourette’s.’) The piece starts quietly, with scraps of Ashley’s mild, tremulous voice arranged next to more fluid French translations and barely-there touches of Moog. After Ashley’s phrases lengthen enough to encompass sense-making phrases, a bass-register groove briefly appears, vanishes, then returns. Few pieces so quiet have proven as captivating; many that intend to be equally startling can’t capture Ashley’s range of surprises.” –Seth Colter Walls, from Pitchfork’s “Fifty Best Ambient Albums of All Time” 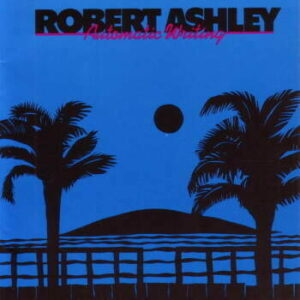