“With knowledge to share, and a readership as well as a dance floor to feed, Lawrence released Life and Death on the New York Dance Floor as the debut imprint on Reappearing Records. A year in the making, a compilation featuring rare and iconic tracks that appear in his much-loved and heavily-thumbed classic Love Saves the Day amounts to the follow-up. The collection features several tracks selected regularly by Mancuso, the party host who exerted a prophetic and unparalleled influence on New York City party culture, as charted by Lawrence. It also includes choice picks from groundbreaking DJs such as Michael Cappello, Steve D’Acquisto, Francis Grasso, Richie Kaczor, Larry Levan and Nicky Siano, whose expressive contributions are faithfully recorded in Love Saves the Day. The compilation traces how disco grew out of the record collections and intuitive sensibility of these and other DJs, offering a unique survey of the era’s expansive sonic palette. “ 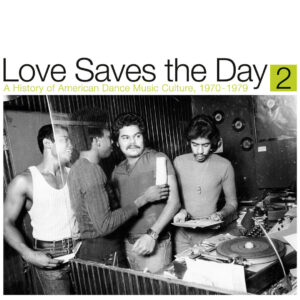